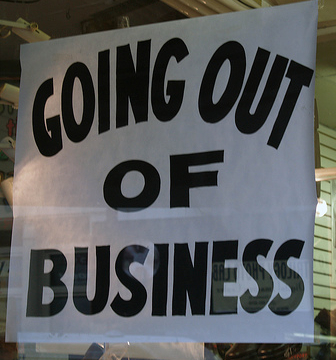 Is the music business closing shop for good?

Last week the world economic situation claimed another victim in the music world.  Pinnacle Distribution, one of the biggest British independent music distributors, declared bankruptcy (known as administration in the UK).  The ramifications of another large physical (CD’s and vinyl) distributor going out of business will have a wide reaching effect.

Distributors work with independent labels to distribute hard copies of a label’s catalog out to the stores and the public.  The labels wait for delivery of payment from the distributors based on the number of units sold.  If a distributor goes under, the labels, and the musicians who are signed to labels, stand in line with every other client/creditor of the distributor waiting to get paid.  Usually the result is not enough money to go around.  A label may end up taking pennies on the dollar for what is owed rather than taking nothing at all.

It’s a true domino effect.  Simplified example:  Jimmy usually buys $100 bucks per year in cd’s for holiday gifts.  This year Jimmy got laid off and is no longer buying cd’s for his buddies.  The store (Best Buy/Target or the last remaining record shop) where Jimmy used to buy cd’s notices that a lot of its customers are like Jimmy and does not order as many cd’s as it did in the past.  The distributor who distributes Jimmy’s favorite bands’ music orders the same number of cd’s as it did last year from the manufacturer, but cannot sell as many units.  The distributor cannot pay the manufacturer nor can it pay the labels who provide the distributor with its product.  The label cannot sell as many of its artists’ cd’s nor can it distribute its cd’s worldwide.  The label who is chiefly dependent on record sales to make cash, cannot continue to market or advertise its artists.  And finally, you, the artist who survives on royalties from record sales does not get paid.

Major downer.  Sorry.  At first glance it appears that the sole reason for the chain reaction which is not-so-eloquently described above is the crumbling world economy.  However, if you have been paying attention to the music industry and reading this blog, you already know that is not the only reason.  The underlying reason for the crumbling music industry is rise of digital music as a true industry standard for music  sales.  The cd doesn’t make sense any more.  It is a “loss leader” for most bands and distributors alike.  The overhead involved in manufacturing, shipping, returns and fees make it almost impossible for an independent label or the artists on that label to make any real money from physical cd sales.

Yes the economy is scary.  Yes music sales as a whole are not great.  But, today there is no reason for a creative independent label or artist to be shackled to the dying distribution system.  Using digital distribution companies, releasing digital only albums, striking exclusive deals with non-music websites or stores are just some of the out-of-the-box methods for musicians to make money.   New and unique methods for delivery are popping up everyday.  Bands can provide fans with exclusive content on its website or through a fan portal or by selling thumb drives with its music preloaded on it.

As the old industry infrastructure continues to crumble, independent labels and artist must move quickly to avoid being swept under by the collapsing giant.  It is truly time to think independently, meet with other creative people and think of methods on your own to get your music to the masses.  Most musicians are creative.  Successful musicians realize that their non-musical-team which they choose to work with must be creative as well.

SHAMELESS SELF PROMOTION OF THE WEEK:  The State of Illinois (?)

My adopted state government of Illinois finally got something right.  Recently it passed Senate Bill 1981 which increased the state film tax incentive in Illinois from 20% to 30% and also includes a tax credit of 15% for the using labor on a film production from poverty stricken areas.   The prvious bill was set to disappear on January 1, 2009 is now extended for an undetermined amount of time.  Independent film makers in the music, movie and television industry should all be happy.  Now the trick is trying to explain the tax incentives to a potential investor.

DISCLAIMER: THIS BLOG WAS ORIGINALLY POSTED ON DECEMBER 8, 2008.  HOT ROD DID NOT GET ARRESTED UNTIL DECEMBER 9, 2008.  THE AUTHOR HEREBY RECANTS ANY AND ALL APPLAUSE OR PRAISE DIRECTED AT THE SOON TO BE “FORMER” GOVERNOR OF ILLINOIS.

This site uses Akismet to reduce spam. Learn how your comment data is processed.