Our annual hip hop showcase just keeps getting better and better.  Here is a video compiled by our amazing event producers, Catharsis.  It gives you just a taste of what it was actually like to be there.  From the new school rhymes of Doomtree, Das Racist and The Cool Kids to the true professionals of EPMD, it was an amazing show.  We were glad just to be a part of it

Our inaugural rock show at Longbranch Inn was equally awesome.  The bands somehow managed to get energy from each other and the crowd and rocked out for 5 hours on Saturday (not an easy task after 3 full days in Austin).  Thanks again to all those who came out and rocked. 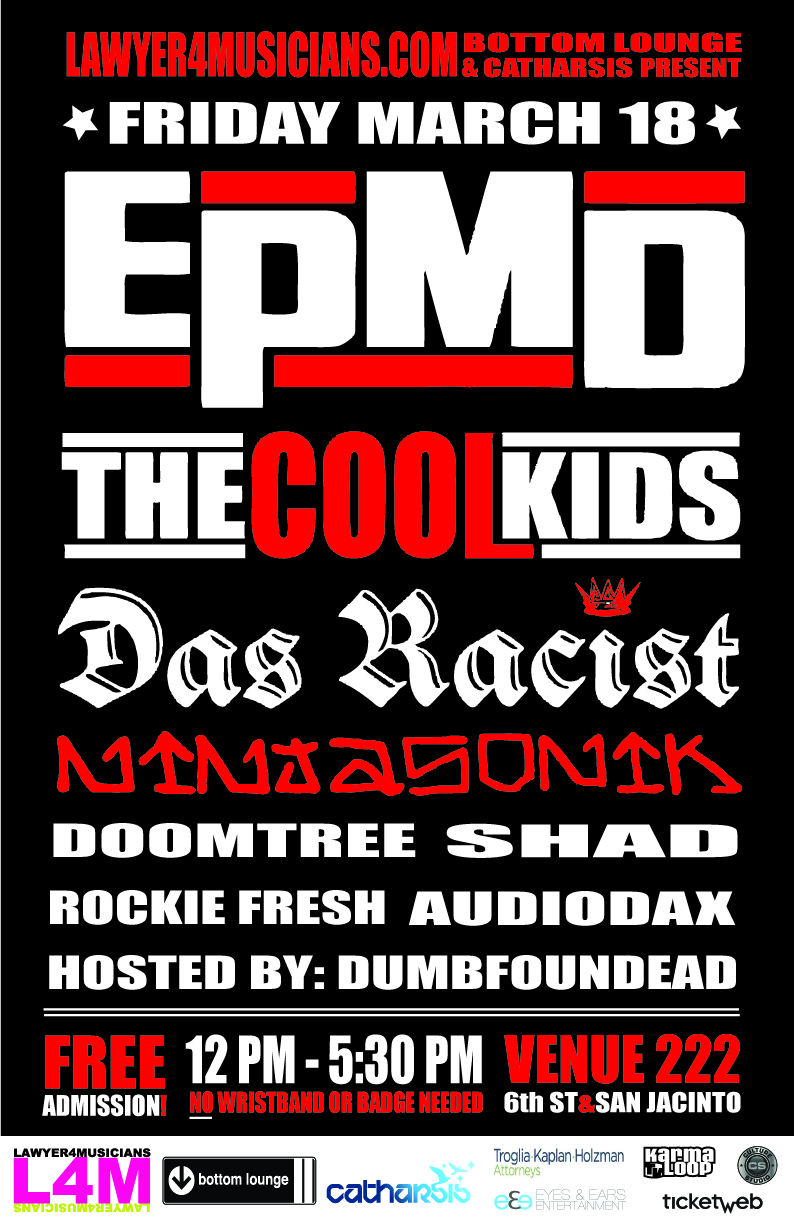 We here at L4M are known for a few things: useful information to musicians and musid industry professionals, witty banter and throwing killer shows in Austin, TX.

The last two years in Austin have been “bananas”.  We have moved from Momo’s to Aces with our hip hop oriented unofficial showcase.  Last year at Aces, we packed the place with about 850 fans who seemed to instantenously decide to forget their weeklong festival hangover and party once more.  Dialted Peoples, The Cool Kids, 88 Keys, Travie McCoy, Bad Rabbits, Kidz in the Hall, and others helped to make a day party spill over into the night.

L4M has expanded since 2010.  We’ve added a couple more lawyers who generally do not suck.  We have also partnered with a pretty bad ass music venue here in Chicago, The Bottom Lounge to host more shows here in our home town.  Naturally, we felt the need to expand our showcase for Austin.

While details are still being put together, we can put a muzzle on some of the rumors and answer some of the questions we have been getting about this year’s festival.  L4M, The Bottom Lounge and some otherh sweet partners will be sponsoring a two day unofficial showcase featuring one day of hip hop and one day of rock.  As the kids say: that’s what’s up!

Confirmed artists include: The Cool Kids, the Doomtree crew, Pac Div, Blah Blah Blah, The Idle Hands, Empires, Elephant Stone and more.  The hip hop show is slated for Friday at Aces (again) and the Rock show will most likely be in the same vicinity on Saturday.  Obviously, more details will follow.  Stay tuned!