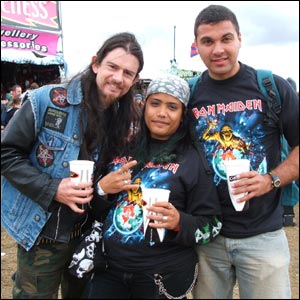 Most people don’t want to be that guy.  You know the guy that rocks the Iron Maiden t-shirt to the Iron Maiden concert.  However, that guy, has helped musicians generate additional revenue for decades.

Today there are many more outlets and many more products that an artist may peddle.  While t-shirts and posters still rule the merch tent, new (and cooler) band merchandise is being developed seemingly every day. Recently one of my clients put out an entire mix tape on a  bracelet.  The LiveStrong looking bracelet ingeniously connects via a USB drive (see below).  This allows a band to sell something that looks cool, is unique and includes the band’s name, logo, design AND their music.  It’s brilliant.  There is even software available that would allow the band to continuously update the USB drive so the fan who purchased it will have updated music and band information and the ability to purchase new music every time the fan plugs the device into her computer.  (contact Vadim at http://www.customusb.com for more info.)

Picture Your Band's Name and Logo on a bracelet/album!

T-Shirts are not what they used to be anymore either.  If you remember this post:  Mos(definitely A Great Idea, you know that I am a big fan of including music on non-traditional media.  Computer codes and affordable USB drives can be included with all sorts of merchandise that fans are more apt to buy.  Mos Def included a code on a designer tee which enabled the purchaser to download his entire new album.  Magazines have used this idea for years; purchase the an issue of Spin and you can download the new single from Jack White’s new band, The Dead Weather.  Even beer purchases include mp3 downloads.  Obviously, indie artists do not brew their own beer, publish their own magazine or manufacture their own t-shirts.  However, with a little bit of research and some creative marketing, partnerships with content starved companies can be forged.

Not only are there new products, but with band websites, myspace, facebook, sonicbids, amazon and other e-stores, there are countless new ways to sell the products.  The back of the tour van will always be the primary way that a true indie rocker sells his burned cd’s, but for a couple bucks more, that indie rocker could sell you an mp3 from his couch.  Internet partnerships work just as well, if not better, as partnerships to manufacture and sell physical products.  If you align yourself with a like minded or themed website that has an on-line store, than you can offer exclusive gear to that site.  You take a chunk of the sales and share the rest (and all of your users that visit the site) with the partner website.   Everyone is a winner.

Music is quickly becoming a “value add” to products that people already purchase.  In the battle to grab a consumers attention, companies will pay a bit more to make their product stand out.   “Free” music is a great way of doing that.  And for musicians, the deals that can be struck with these type of forward thinking companies can be fairly lucrative; or at the very least serve as a great way to get music out to a whole new audience.

Creativity has to continue after the music is recorded.  In today’s era, where the only type of music sale that is increasing is vinyl, artists have to think creatively in order to make a profit.  If the public will only pay for select albums and download the rest of their music for free, new income streams must be forged by bands.  Selling your music in a non-traditional way may increase a band’s merchandise sales as well as “album” sales all at the same time.